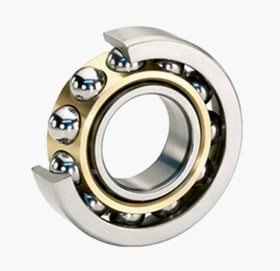 Angular contact ball bearings can withstand both radial and axial loads. Can work at higher speeds. The larger the contact angle, the higher the axial load carrying capacity. High precision and high speed bearings typically take a 15 degree contact angle. Under the axial force, the contact angle will increase. Single row angular contact ball bearings can only withstand axial loads in one direction and will cause additional axial forces when subjected to radial loads. And can only limit the axial displacement of the shaft or casing in one direction. If it is installed in pairs, the outer rings of a pair of bearings are opposite, that is, the wide end faces the wide end faces, and the narrow end faces the narrow end faces. This avoids causing additional axial forces and limits the shaft or housing to axial play in both directions.